Jason - I told you about the polls where we're so damn close -- down only by single digits in Ohio and Illinois and up by one in Missouri. We're also doing better in polls in Florida and North Carolina than we were before we won in Michigan. But let me tell you where else we're so damn close: getting to 150,000 contributions made to our campaign from yesterday until midnight tonight. Our campaign is only doing so well because - more than 5 million times - people like you have made a contribution to support Bernie. The money we raise to power our movement comes from you and you alone. No super PACs. No millionaires or billionaires. Just you, Jason, and our political revolution. Contribute $3 to our campaign now and help us reach our goal of 150,000 new contributions by midnight tonight: https://secure.actblue.com/contribute/page/a-moment-of-truth Thank you for standing with Bernie. In solidarity, Jeff Weaver Campaign Manager Bernie 2016 ---- Paid for by Bernie 2016 (not the billionaires) PO Box 905 - Burlington VT 05402 United States - (855) 4-BERNIE This email was sent to hello@rodriguezcommaj.com. Email is one of the most important tools we have to reach supporters like you, but if you’d like to, click here to unsubscribe: https://go.berniesanders.com/page/unsubscribe/. Stand against the powerful special interests who are systematically buying our Congress and have their sights set on the presidency by contributing to Bernie here: https://secure.actblue.com/contribute/page/lets-go-bernie?refcode=email_footer.
Try
Litmus

Want to see what this email looks like in 50+ email clients? Try Litmus Free

Looking for the following words in your email:

We just opened a brand new tab in your browser, in there you’ll find your scoped email ready to be edited. 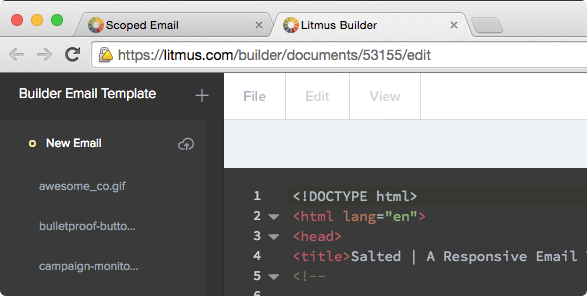 Take me back to scope